Learn More
These are your current custom fields:
Caridina multidentata
http://www.seahorseaquariums.ie/info/50 How to care for Freshwater Shrimps and Snails.pdf 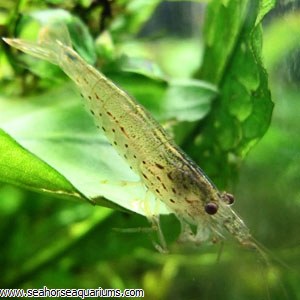 The Amano Shrimp is a very popular shrimp in the hobby. It is second in popularity to the Red Cherry Shrimp. The name Amano Shrimp originates from the well known aquarist Takashi Amano who frequently uses the shrimp in his aquariums as algae eaters. However most people do not know that the Amano Shrimp is a difficult shrimp to breed and that virtually all Amano Shrimp are caught in the wild and then sold to hobbyists. Captive breeding has been achieved but is rare.

Hobbyists sometimes begin with this species to due the ease of acquiring it. The notion that it is a superb algae eater also attracts aquarists who are into planted tanks. Unfortunately most of the hobbyists who acquire the Amano Shrimp do not know that it cannot be bred in freshwater and wonder why the pregnant females with many eggs never produce babies.

Most Amano shrimp sold at Seahorse Aquariums are captive bred and not wild caught. Most first timers keeping these shrimp think that they are solely algae eaters and can live off of the tank and require no food. You must feed this shrimp.

The Amano Shrimp requires brackish water in order to breed successfully. The pregnant females carry many eggs, most likely due to the loss rate of the larvae after hatching. The shrimp hatches as a tiny larvae free floating in the water. It is not like other shrimp which hatch as miniature adults. The larvae are very delicate and require special care. Below is a quick run down on information required to breed this species in captivity. It is a difficult task to captive breed the Amano Shrimp. However, if you are up for the challenge then good luck. It is definitely an achievement if you are successful!

The adults are kept in an 150 litre 'breeder' tank with a sponge filter and lots of hornwort. The pH is close to neutral and the temperature around 24 degrees C. They eat 'GP Pellets' plus the occasional algae tablet -- there's should also be a lot of hair algae in the tank, more than they can keep up with.