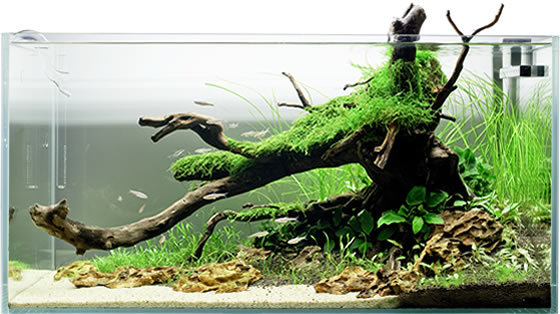 Not only did show all the allure and promise of a bedding-in aquascape, but Darren had taken the unusual move of including the grossly unrated Rainbow Shiner, Notropis chromosus, as its centrepiece fish. Look closely and you'll spot other species here too. Cleaning duties are takencare of by three Amano shrimp, Caridina multidentata, as well as three unidentified Octocinclus. Despite the tank being unheated, the environmentstays stays warm at 23°C/73.4°F courtesy of ambient factors. The wood used is simple bogwood; three pieces have been attached with cable ties to create the shape seen here. A thick layer of Christmas moss is coated over it to give that drooping, woodland effect. With some help from Aquascaping legend Peter Kirwan, the 'scape was sculpted with this central hardscape in mind. In the back corner, Vallisneria, while the mid ground is seeded with Lilaeopsis brasiliensis.

In the foreground whisps of Eleocharis sp. 'mini' grow, with a brace of Cryptocoryne lucens behind them. The finishing touches are brought by the Anubias nana tied to the low sections of the wood. Hardscape rocks are the very affordable Dragone stone.

Lighting is T5 fluorescent provided by 4 x 29w tubes in an ATI Sunpower unit, and flirtation, hidden in the cabinet beneath, is courtesy of 2 x JBL e1500 canister filters. Note that one side is connected up to glassware but the other has bespoke stainless steel outlet and spraybar attached - a very nice touch that is becoming increasingly popular. A connected CO2 unit delivers gas to a level of 30 ppm at all times, and a mixture of ADA's Brighty K as well as Brighty Step 2 provides fertilization.

However, if you want to see this aquarium in the flash you might struggle. Not long after we saw it during a previous Shoptour of Ireland, a customer was clearly eequally taken and purchased the whole tank as seen - lock, stock and barrel.

The cost to recreate Darren's 'scape