Learn More
These are your current custom fields:
Heliofungia actiniformis
http://www.seahorseaquariums.ie/info/30 How to care for Corals.pdf 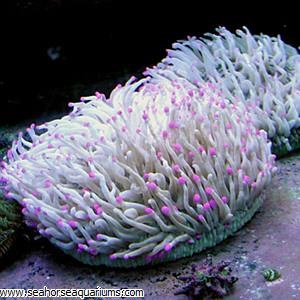 The Long Tentacle Plate Coral is a large polyp stony (LPS) coral often referred to as a Heliofungia Plate, Mushroom, or Disk Coral. Its genus name, Heliofungia, was derived from the Latin words helios (sun) and fungus (mushroom), which describes its calcareous skeleton shape. With its long tentacles extended, it takes on the appearance of an anemone.

It is a solitary, aggressive coral, and with its long tentacles can damage other corals that it comes in contact with.
When placing in the aquarium, keep in mind that it will often inflate itself with water and expand to twice its size, with sweeper tentacles extending well beyond its base.

It will do best on the bottom of a reef aquarium, preferably lying on a fine sandy substrate. The Long Tentacle Plate Coral is easy to maintain in the reef aquarium and makes an excellent candidate for the beginner reef aquarist.

It requires moderate lighting combined with moderate water movement within the aquarium. For continued good health, it will also require the addition of calcium, strontium, and other trace elements to the water.

It should be fed micro-plankton or brine shrimp.