Learn More
These are your current custom fields:
Trochus Spp.
http://www.seahorseaquariums.ie/info/32 How to care for Marine Molluscs, Crabs & Shrimps.pdf 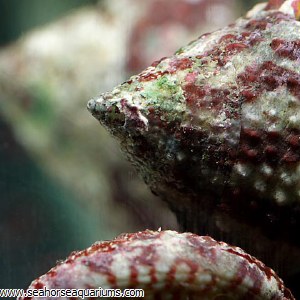 Also known as the Trochus, Turban or Top Shell, or Turban Snail, this species of the Trochus genus is the true Banded Trochus Snail from Indonesia. Perhaps what many aquarists appreciate the most is the ease with which Banded Trochus Snails seem to breed in the home aquarium. It reproduces sexually by releasing gametes into the water column.

The gametes appear as a cloudy, white substance. Breeding activity is usually sparked by changes in lighting or water conditions. After the gametes join, they develop into free-swimming larvae that eventually settle into your aquarium substrate and develop into mature snails over a period of a few months.

The Banded Trochus Snail does best in a well-established aquarium with ample hiding places and room to forage. It naturally feeds on algae, cyanobacteria, and diatoms amongst your live rock, substrate, and aquarium glass. The Banded Trochus is also an effective film algae eater. However,