Learn More
These are your current custom fields:
Synchiropus Picturatus 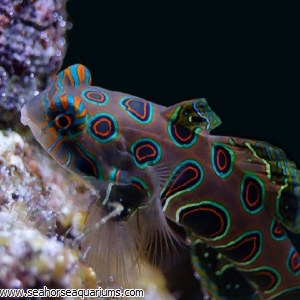 The head, fins, and body are a psychedelic combination of blue, orange, and black spots on a green base. Males may be distinguished from females by their more-elongated first dorsal spine.

It requires a 100 litre or larger aquarium with live substrate and plenty of hiding places. It is moderately hardy in reef aquariums if given special care. It is not overly aggressive towards other fish, except for conspecifics.

The Spotted Mandarin has been known to spawn successfully in an aquarium.

The diet should consist of a variety of live vitamin-enriched brine shrimp and live black worms. It will eat natural prey off live rock and live sand.

Please Note: Dragonets are incredibly difficult if not impossible to adapt to a captive diet and will rarely accept anything but the tiniest of live foods.