Learn More
These are your current custom fields:
Cladiella sp.
http://www.seahorseaquariums.ie/info/30 How to care for Corals.pdf 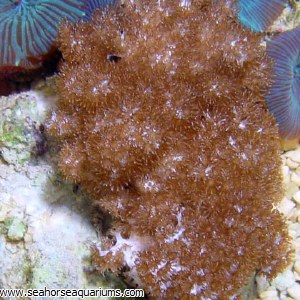 The Young Blushing Finger Leather Coral is commonly referred to as Cladiella Finger Leather Coral, Cauliflower Coral, Colt Coral, or Blushing Coral. It is very difficult to identify exact species because there is so much variation even within each species. Its body is white or cream color with tan or brown polyps.

It has short, thick branches. When the polyps are expanded, it looks bushy, but appears quite lumpy when they are contracted. Some Young Blushing Finger Leather Corals, however, have elongated branches.

It is an aggressive coral and needs space between itself and others in the reef aquarium. It is relatively hardy, and requires medium to high lighting and medium to strong water movement, along with the addition of iodine, strontium, and trace elements added to the water.

It is easy to culture in the reef aquarium by snipping off a piece of its tentacle, and attaching this cutting to a solid structure such as live rock.

It contains the symbiotic algae zooxanthellae and receives the majority of its nutrition from the light. It will also benefit from additional food such as micro-plankton, baby brine shrimp, or foods designed for filter feeding invertebrates.