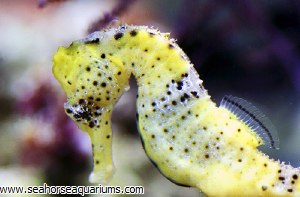 The colors of the Longsnout Seahorse, also known as the Slender Seahorse, or Great Brazilian Seahorse, may include red, saffron, buttercup, ochre, or mustard yellow, often sprinkled with many darker spots.

They do best when kept as a pair or with a small group of their own kind (two or three pairs), in a species-only tank of 75 litres or larger. The taller the aquarium, the better, at least 40cm high. It should feature plenty of live rock and a good protein skimmer.

Good circulation is more important, as it is a feeble swimmer. It will get along well with small, shy fish such as gobies, ocellaris and percula clowns, and firefish. But aggressive, territorial fish, or fast-moving fish do not make good companions.

The Longsnout Seahorse generally mates for life and will impress the female with its dramatic color changes, energetic pouch displays, and graceful dancing. The female will then deposit as many as 1600 eggs in the male pouch. About 14 days later, the male will give birth between 50-500 perfect miniature replicas of the male. If well fed and cared for, seahorses will breed year-round in an aquarium, producing a new brood every two weeks or so.

Fast, aggressive fish will out-compete the Longsnout Seahorse for food. It needs a diet of mysid shrimp. It is a slow, deliberate feeder and prefers two or more small feedings per day.

Seahorses spend most of their time clinging to seagrass with their prehensile tail rather than swimming. Its many unusual features and habits make it perhaps the most spectacular fish that may be kept in the home aquarium.