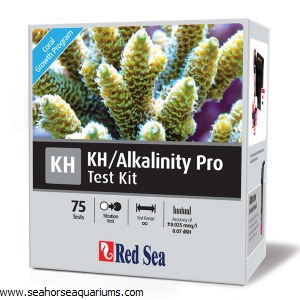 This Test Kit is an advanced titration test, measuring the level of buffers in your reef aquarium to an exceptionally high resolution of 0.025 meq/l, making this kit a must have for any reef keeper. This test kit enables the accurate dosing of RedSea's Reef Foundation B supplement (buffer) which is part of the complete RedSea Reef Care program.

Introduction to pH & Alkalinity:
The pH is a very important parameter in the biology of aquatic organisms. It is a measure of the acidity or basicity of the water. The scale runs from zero to 14. Zero is the most acidic, 7 is neutral and 14 is the most basic. A change of 1 pH unit, for example from 7 to 6, means that the water gets 10 times more acidic.

Due to its chemistry, salt-water is able to absorb a certain amount of acidic matter without a resulting change in pH. The substances in the water that do this are called buffers. The ability of water to withstand changes in pH is called buffer capacity. Based on a method of measuring buffer capacity it is referred to as the alkalinity of seawater. In some of the literature alkalinity is termed “Carbonate Hardness” or “ KH Carbonate Buffer”. This is exactly the same measurement as is measured in the Alkalinity Mini-Lab Test.

pH and alkalinity
The pH of natural seawater varies geographically in the world’s oceans between 8.1 and 8.4. On a local scale the pH is however remarkably stable. This is due to dissolved buffers (mainly bicarbonates), which prevent pH changes. Because of the enormous volume of the ocean, a nearly inexhaustible stock of buffers are present: the sea can take up large amounts of acids, without a noticeable change in pH.

Compared to the sea the volume of a marine aquarium is very limited and therefore the alkalinity is also limited. As fish produce acid waste products and as the buffering substances are used up by calcareous algae and invertebrates, the buffer capacity may become so low that the pH could suddenly fall. This would be very dangerous to all organisms in the aquarium.

A common symptom of an unsuitable pH is pH-stress. Especially in the marine aquarium, unsuitable pH values are very stressful to fish, and increase the chance of the fish being susceptible to disease (marine white spot).