Learn More
These are your current custom fields:
Fungia repanda
http://www.seahorseaquariums.ie/info/30 How to care for Corals.pdf 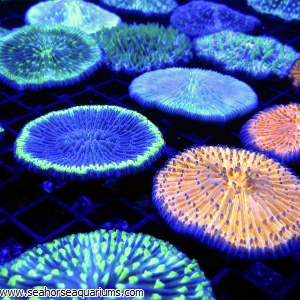 The Short Tentacle Plate Coral is a large polyp stony (LPS) coral often referred to as a Disk, Mushroom, Chinaman, Fungia Plate. It comes in a variety of colors, some very bright. They are very hardy corals that do not require intense lighting nor water flow.

It is a solitary, semi-aggressive coral with shorter tentacles than its cousin the Long Tentacle Plate Coral (Heliofungia sp.). Even with short tentacles, it can still damage other corals that it comes in contact with.
With placement in the aquarium, keep in mind that it will often inflate itself with water and expand to twice its size.

It will do best on the bottom of a reef aquarium, preferably lying on a fine sandy substrate. The Short Tentacle Plate Coral is easy to maintain in the reef aquarium and makes an excellent candidate for the beginner reef aquarist. Care should be taken in handling it however, to prevent damage.

It requires moderate lighting combined with moderate water movement within the aquarium. For continued good health, it will also require the addition of calcium, strontium, and other trace elements to the water.

It is ideal to feed Plate Corals a few times per week with brine or mysis shrimp, and small chopped meaty foods. Only offer food when the polyps of the coral are fully extended.