Learn More
These are your current custom fields:
Tubipora musica
http://www.seahorseaquariums.ie/info/30 How to care for Corals.pdf 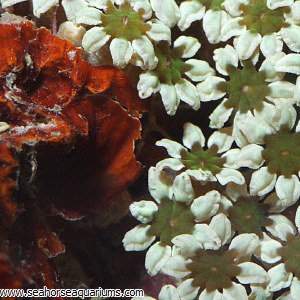 The Pipe Organ Coral is a soft coral, but is often referred to as a hard coral because of its red calcareous skeleton. Its common names may also include Organ Pipe Coral, or Daisy Coral.
When its polyps are open, it is often confused with the star polyps or clove polyps because of their similar appearance. These corals do have the advantage over the other similar looking soft corals in that they will not spread across the rocks and crowd out other species.

Its behavior is peaceful because it lacks sweeper tentacles, and is safe to place near other peaceful corals.
It will require a moderate to high light level combined with a medium to strong water movement within the aquarium. It is fragile, however, so it should not be positioned in currents which could displace or damage it.

For continued good health, it will also require the addition of calcium, iodine, strontium, and other trace elements to the water.

The symbiotic algae zooxanthellae hosted within its body provides the majority of its nutritional requirements through photosynthesis. It can also be fed additional food such as phyto and zooplankton or baby brine shrimp.