Learn More
These are your current custom fields:
Platygyra sp.
http://www.seahorseaquariums.ie/info/30 How to care for Corals.pdf 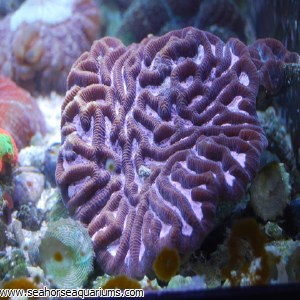 The Maze Coral is a large polyp stony (LPS) coral and is also referred to as Brain, Worm, Closed Brain, or Bowl Coral. Its genus name, Platygyra, was derived from the Greek words platys (flat) and gyros (wide circle), which describes the maze-like channels in its calcareous skeleton.
The Brain Worm Coral colonies are usually massive and either dome-shaped or flattened, with various color shades of green, brown, or gray and contrasting valleys which may be fluorescent under actinic lighting.

It is a semi-aggressive coral that extends sweeper tentacles at night and should be provided with adequate spacing between itself and other corals in the aquarium. The Platygyra Brain Worm Coral is relatively hardy, easy to maintain in the reef aquarium, and makes an excellent candidate for the beginner reef aquarist.

It requires moderate lighting combined with moderate water movement. For continued good health, it will also require the addition of calcium, strontium, and other trace elements to the water. It produces a large amount of mucus so a protein skimmer help keep this out of the water column.

It will benefit from additional food in the form of micro-plankton or brine shrimp fed in the evening while its tentacles are visible.