Learn More
These are your current custom fields:
Lactoria Cornuta 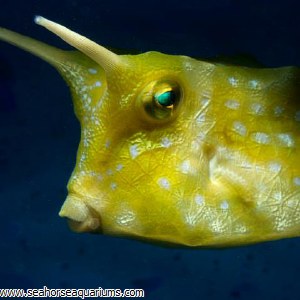 The Cowfish Longhorn inhabit the reefs of the Indo-Pacific, usually in the less turbid waters. The body is yellow and covered with white dots, and is occasionally referred to as the Yellow Boxfish; however, the Longhorn is not to be confused with Ostracion cubicus, commonly called the Yellow or Polka Dot Boxfish.

In the wild, it is not uncommon to see a 20" specimen, while in the aquarium the Cowfish Longhorn tends to be dramatically smaller - 40cm or less.

When possible, the Cowfish Longhorn should be the first fish introduced in the tank. It is intolerant of other Longhorns, so keep it in a large tank, with some live rock for algae scraping.

Similar to other boxfish, the Cowfish Longhorns skin is poisonous and, when threatened, it will release a toxin lethal to other tank members, including other Longhorns. Seahorse Aquariums Ltd. cannot accept responsibility for any loss that may occur should this animal poison the aquarium.

Since they are omnivores, the Cowfish Longhorn should be offered a variety of meaty and vegetable foods. They are slow eaters, and should not be housed with aggressive eaters.