Learn More
These are your current custom fields:
Danio frankei
http://www.seahorseaquariums.ie/info/7 How to care for Tetras, Rasboras and Danios.pdf 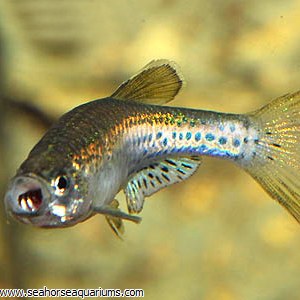 Its body sparkles with a burnished gold metallic colour peppered by many bluish-gray spots. Long, veil-like fins trail behind and catch the light as the Longfin Leopard Danio moves, giving this hardy and easy-to-care-for fish a definite wow factor in the peaceful community aquarium.

Native to the Ganges region in Eastern India, wild Leopard Danios are found in a variety of habitats, ranging from fast-moving streams to slow-moving, nearly stagnant ponds. Members of the Danio genus have been a long-time favourite among freshwater aquarists for their attractive coloration, active personality, and hardiness.

The Longfin Leopard Danio is best kept in groups and gets along with other Danio species as well as other peaceful fish of the same size. In the home aquarium, this member of the Cyprinidae family prefers a well-planted aquarium with large open swimming areas.

A breeding pair should be placed in a breeding aquarium with fine-leaved plants for them to spawn over. Roughly 300-400 eggs are produced and hatch within two days. The fry should be fed small pieces of live foods, such as brine shrimp.