Learn More
These are your current custom fields:
Centropyge flavissimus
http://www.seahorseaquariums.ie/info/25 How to care for Dwarf Angelfish.pdf
http://www.youtube-nocookie.com/v/tWi-QrKbLac?hl=en_GB&version=3
1MF 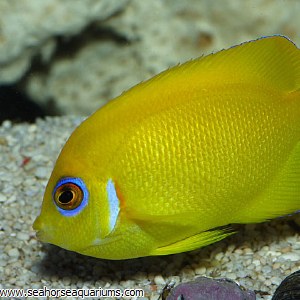 This pugnacious little fish is one of the more aggressive of the dwarf angelfish once established and chooses it’s territory. It will quarrel with not only other dwarf Angelfish, but also any other fish which resembles in either color or shape.

It has been known to kill Butterflyfish (since most Butterflyfish are yellow) twice its size. It can be housed successfully with both the Half-Black (C. vrolikii) and Eibls Angelfish (C. eibli) as long all are added to the aquarium at the same time.

The Lemonpeel Angelfish is one of the least hardy of the pygmy angelfish and needs to be added to an aquarium utilizing live rock for filtration or decoration with sufficient micro and macro algae growth. For aggression and hardiness sake, this should be one of the very last fish added to your tank.

It is a very beautiful fish and looks great when added to a reef tank but keep a close eye on this fish. As a juvenile, it will mostly leave corals alone but as an adult, it will make a meal out of your prized LPS coral if it is not provided enough food. It will leave non-sessile invertebrates alone such as shrimp and crabs.

Diet: In the wild the Lemonpeel angelfish has a varied diet consisting of algae and crustaceans. The Lemonpeel angel is not considered reef safe as it may nip at large polyped stony corals, soft corals, zoanthids and clam mantles.

There are occasional specimens that live very long lives in reef aquaria as peaceful citizens but the majority of these fish will often turn for no apparent reason when they are older.

This may be easily explained as many of the Centropyge family are predominately plankton eaters as juveniles and will switch to consuming it’s natural adult diet once fully grown. Sometimes all it takes is for an underfed individual to ‘test’ a foo