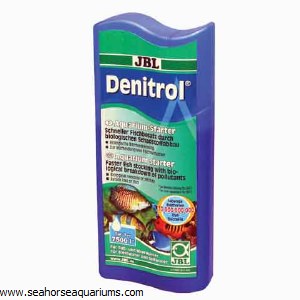 Bacteria starter • Biological nitrite removal. • Detoxifies water with fast start formula using highly active cleansing bacteria and enzymes. • 8 complementary bacterial cultures for the breakdown of proteins (heterotropic bacteria), ammonium and nitrite. • The first fish can be introduced to the newly established aquarium 24 to 48 hours after application of JBL Denitrol. Product description JBL Denitrol 10 billion (per 100 ml) of 8 different harmless species of bacteria with synergic effect in a new formula, designed for the specific breakdown of organic impurities (mould, feed residues), ammonia and nitrite in the aquarium water. Problem solutions Where comes nitrite in aquariums from? Nitrite (NO2) is a strong poison which blocks the transport of oxygen by the blood and leads to internal suffocation. It is formed by bacterial decomposition from ammonium and is further broken down into the non-toxic nitrate NO3. If nitrite levels exceeding 0.1 mg/l are measured, the bacterial break down of nitrogen is seriously damaged, without any doubt. This may be the result of treatment with antibacterial medications. Measures against excessive nitrite levels in a freshwater aquarium: 1. Major water change of 1/3 to ½ the content of the aquarium. 2. Preparation of the water with JBL Biotopol. 3. Activate filter with JBL Filterstart. 4. Add JBL ClearMec plus to the filter. This filter material removes nitrite and nitrate from the water. 5. Identify cause: quantity of feed, fish stocking level, use of medications etc. Measures against excessive nitrite levels in a saltwater aquarium: 1. Change 1/3 water. 2. Preparation of the water with JBL BioMarol. 3. Identify cause of nitrite: remove dead fish, clean areas of pollution, check filter etc. 4. Prime filter biologically with JBL Filterstart. Ammonium Ammonium is considered to be the first decomposition stage in the nitrogen cycle. It consists of proteins, which are converted by heterotrophic bacteria to ammonium. In addition, fish excrete a percentage of their bodily weight into the water every day in the form of ammoniu