Learn More
These are your current custom fields:
Colisa fasciata
http://www.seahorseaquariums.ie/info/10 How to care for Bettas, Gouramis and Paradise fish.pdf 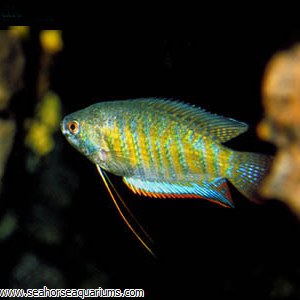 The Giant Gourami, also known as Banded Gourami, Rainbow Gourami, or Striped Gourami, is a pale to golden yellow with silvery pale blue stripes running vertically along its body.

In some parts of India it is used as a food fish, where it is dried and then eaten. The Giant Gourami requires a tank that is 100 litres or larger with densely planted edges, with preferably a dark tank bottom.

There should be plenty of room left in the centre of the tank for this gourami to swim. They prefer the company of other fish that are similar in size and temperament. The Giant Gourami is an egg layer and the male will build a bubblenest before spawning. The male and female are distinguished by the dorsal fins and body colour.

The dorsal fin on the male ends in a point and the body is darker, changing to nearly black during spawning.

When breeding, the water in the tank should be decreased to about 20cm deep and the temperature should be 28°C. After spawning, the female should be removed to a separate tank because the male will jealously guard the eggs, sometimes becoming aggressive towards the female.

The eggs will hatch in 24 hours. The Giant Gourami is omnivorous and prefers algae-based foods as well as meaty foods. An algae-based flake food, along with freeze-dried bloodworms, tubifex, and brine shrimp will provide these fish with the proper nutrition.