Learn More
These are your current custom fields:
Colisa chuna
http://www.seahorseaquariums.ie/info/10 How to care for Bettas, Gouramis and Paradise fish.pdf 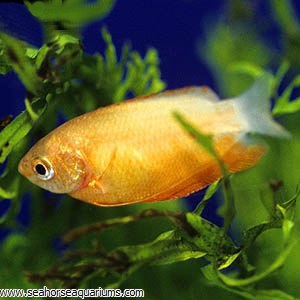 A pair of Honey Dwarf Gouramis will defend their territory during spawning. The male will build a bubblenest, but the pair may spawn before the nest is built. After spawning the female should be moved to a different tank.

The larvae hatch in 24-36 hours and are free-swimming after approximately one day. The male will tend to the eggs and fry, and when the fry are 2-3 days old the male should also be removed. When first hatched, the fry should be fed infusoria, and later, brine shrimp and finely ground flakes.

Freeze-dried tablets may also be fed to older fry. The Honey Dwarf Gourami is an omnivore and prefers both algae-based foods as well as meaty foods. An algae-based flake food, along with freeze-dried bloodworms, tubifex, and brine shrimp will provide these fish with proper nutrition.