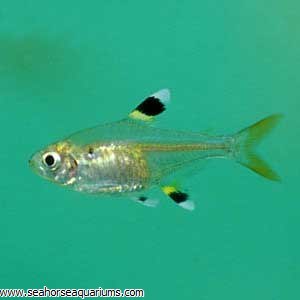 Unlike sensitive tetra species that need to be kept in soft water conditions, the hardy Gold Pristella Tetra is an excellent choice for new aquarists.

Furthermore, the Gold Pristella Tetra is very peaceful and is compatible with other non-aggressive fish.

Similar to other tetra species, the male Gold Pristella Tetra will tend to be smaller and thinner than the female.

The natural diet of the Gold Pristella Tetra consists primarily of small insects and planktonic animals. However, it will accept frozen or freeze-dried brine shrimp, daphnia, bloodworms tubifex, as well as micro pellet food and high quality flake foods.