Learn More
These are your current custom fields:
Colisa lalia
http://www.seahorseaquariums.ie/info/10 How to care for Bettas, Gouramis and Paradise fish.pdf 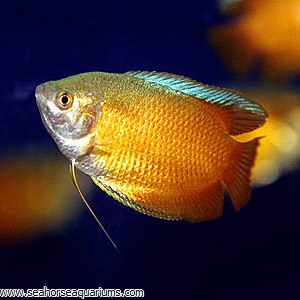 The male is a vivid orange-red with turquoise blue vertical stripes that continue into the fins. Females are pale, silvery blue-gray with very faint yellowish vertical stripes. Dwarf Gouramis are considered Labyrinth Fish, meaning they breathe directly from the air, and must have access to the surface.

Dwarf Gouramis require a tank that is 30 litres or larger. The aquarium should be heavily planted and have at least part of the surface covered with floating plants. A darker substrate will help show-off the gouramis colors, and peat filtration is recommended. Regular water changes are a must, as this gourami can be susceptible to disease.

They should not be kept with large, aggressive fish, but are compatible with other small, peaceful fish as well as fellow gouramis. Loud noises often scare them, so the tank should be in a quiet area. The Dwarf Gourami is a bubblenest builder that uses plants to help bind together the bubbles. Besides the difference in colour, the sex can be determined by the dorsal fin.

The males dorsal fin is pointed, while the females is rounded. The water level should be reduced to 20 cm during spawning, and the temperature should be approximately 28°C. After spawning the female should be moved to a different tank.

The male will tend to the eggs and fry, and when the fry are 2-3 days old the male should also be removed. When first hatched, the fry should be fed infusoria, and later, brine shrimp and finely ground flakes. Freeze-dried tablets may also be fed to older fry.

The Dwarf Gourami is an omnivore and prefers both algae-based foods as well as meaty foods. An algae-based flake food, along with freeze-dried bloodworms, tubifex, and brine shrimp will provide these fish with the proper nutrition.