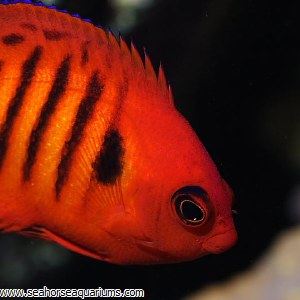 A flashy splash of red color to the home aquarium, the Flame Angelfish is often considered reef safe. Specimens that are purchased as medium individuals readily adapt to a reef aquarium lifestyle.

They will adapt to a captive diet quickly which will, most of the time, prevent them from bothering soft and stony corals. Individual specimens that do pick at coral or clam mantles are more often than not under fed or under nourished.

It will completely ignore non-sessile invertebrates such as shrimp or crabs. The Flame Angelfish is one of the most popular of all the Centropyge Angelfish with good reason. It is hardy enough for beginners and attractive enough for the seasoned aquarist because of its extremely bright, bold coloration.

It is very aggressive towards its own kind but can be added to an established community aquarium as long as it is added close to last. It is not a good candidate for aquariums that do not use live rock for filtration or decoration.

Diet: In the wild, the Flame Angelfish has a varied diet consisting of algae and crustaceans. There are occasional specimens that live very long lives in reef aquaria as peaceful citizens but the majority of these fish will often turn for no apparent reason when they are older.

This may be easily explained as many of the Centropyge family are predominately plankton eaters as juveniles and will switch to consuming it’s natural adult diet once fully grown.

Sometimes all it takes is for an underfed individual to ‘test’ a food source. This being the case, be sure to add this specimen to a well established tank and feed frozen mysis shrimp, meaty crustaceans such as shrimp and clam. Be sure to include algae such as spirulina.