Learn More
These are your current custom fields:
Cynarina lacrymalis
http://www.seahorseaquariums.ie/info/30 How to care for Corals.pdf 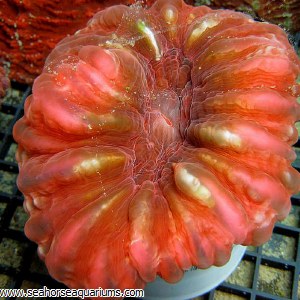 The Doughnut Coral is a large polyp stony (LPS) coral and often referred to as the Cats Eye, Tooth, Doughnut, Teary Eye, or Meat Coral.
Its genus name, Cynarina, is derived from the Greek word kinara (artichoke) and ina (similar to) and as the naming foreshadows, it really does resemble an artichoke.

The Cynarina Button Coral is a round solitary coral, one of the largest single-polyped corals found in nature today, and available in many different color forms from pastel to bright and translucent, to drab variations. Sometimes, it is confused with its closest relative, Scolymia.

While it is not an aggressive coral, it should be provided with adequate spacing between itself and other corals because it can expand to twice its size.
It is easy to maintain in the reef aquarium and makes an excellent choice for both the beginner or advanced reef aquarist.

It requires medium lighting combined with low water movement. For continued good health, it will also require the addition of calcium, strontium, and other trace elements to the water.

It should be fed meaty foods such as micro-plankton or brine shrimp at night.