Learn More
These are your current custom fields:
Ancistrus sp
http://www.seahorseaquariums.ie/info/20 How to care for Tropical Algae Eaters.pdf 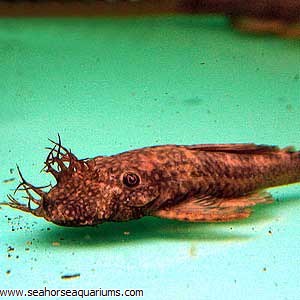 The Bushy Nose Plecostomus, also known as the Bristlenose Plecostomus, comes from the rivers and tributaries of South America. It is mainly brown, with a mottling of lighter areas.

The mouth area and nose are covered in short, whisker-like appendages, which are used for detecting food. There are also many colour and fin variations available. Bushy Nose Plecos make good additions to any community aquarium.

The Orange Bushy Nose Pleco is a variation that is orange with dark brown or black markings. These plecos will darken with age, as well as gain whiskers on the nose.

The Albino Gold Bushy Nose Pleco, also known as the Yellow-Ancistrus, comes from the Amazon Basin of South America. The Albino Long Fin Pleco comes from the rivers and tributaries of Paraguay.

They are pale in coloration with very long flowing fins. Like other albino fish, these plecos have the signature red eyes. Planted aquariums with hearty, fast-growing plants, high aeration, and water movement make for a healthy environment.

Rocks and driftwood help to accent a natural habitat and provide hiding spaces to cut down on stress for the Bushy Nose Plecostomus.

A recommended minimum tank of 30 gallons should be provided to house this fish. The Bushy Nose Plecostomus is relatively easy to breed and breeding occurs mostly in the winter months. This Plecostomus can be triggered to breed in the late fall by performing a 75% water change.

The eggs are usually deposited on a piece of driftwood where the male will stay to guard them. The fry will become waterborne in approximately 10 days, at which time, they should be removed and raised in a separate aquarium.

Feed the fry mashed and peeled peas. Feeding the Bushy Nose Plecostomus is not difficult due to the fact that it is not a picky eater. Feeding off the bottom of the aquarium, it gets most of its nutrition from leftover food and algae.

If there is no algae or left over food present, supplement with high quality flake food, sinking carnivore pellets, freeze-dried bloodworms, and tubifex.