Learn More
These are your current custom fields:
Lobophyllia Hemprichii
http://www.seahorseaquariums.ie/info/30 How to care for Corals.pdf 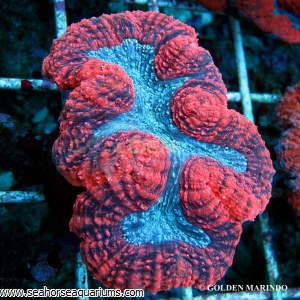 The Lobophyllia Brain Coral is a large polyp stony (LPS) coral often referred to as a Lobed, Colored, Carpet, Flat, or Open Brain Coral, Meat Coral, Modern Coral, or Large Flower Coral.
It has fleshy polyps that hide its calcareous skeleton. It is found in a variety of textures and color forms. Some are smooth, while others are pimply, and look like carpet. Colors vary from bright red, green, orange, gray, tan, or brown.

Its behavior is semi-aggressive and it will sting other corals with its extended sweeper tentacles during the night. Provide plenty of space between it and other neighboring corals. It is easy to maintain in the reef aquarium, making it an excellent candidate for the beginning through expert reef aquarist.

It requires moderate to strong lighting combined with a moderate water movement within the aquarium. For continued good health, it will also require the addition of calcium, strontium, and other trace elements to the water.

The symbiotic algae zooxanthellae hosted within its body provides the majority of its nutritional requirements through photosynthesis. It will also benefit from additional food in the form of micro-plankton or brine shrimp fed in the evening when its tentacles are visible.