Learn More
These are your current custom fields:
Melanotaenia boesemani
http://www.seahorseaquariums.ie/info/11 How to care for Rainbowfish.pdf 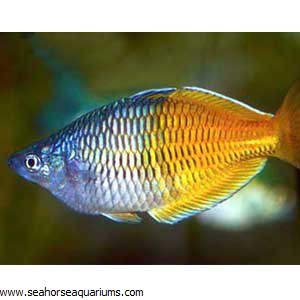 The Boesemani Rainbow creates a colourful centrepiece for any freshwater home aquarium.

Males have a beautiful bluish purple head that fades into a gorgeous orange and yellow posterior. Though females are not as colourful, their brilliant silver coloration is equally as stunning against any backdrop of plants or rockwork.

Regardless of sex, however, Melanotaenia boesemani boasts the same distinct characteristics as other Rainbowfish, including large eyes, a deeply forked mouth, and dual dorsal fins.

Like many members of the Melanotaeniidae family, the Boesemani Rainbow also boasts the characteristic blackish-silver band of scales running laterally from gill to tail.

This peaceful Rainbow is a schooling fish that does best in a planted aquarium with plenty of room to swim. If a dark gravel substrate is used, the gravel may aid in intensifying the colours of the Boesemani Rainbow.

When maintaining a school of Boesemani Rainbow, an aquarium that is at least 4 feet in length should be used. An egg layer, Melanotaenia boesemani spawns on moss throughout the course of several days.

The fry hatch after six or seven days and require small pieces of live food. We offer juveniles of this species, and they are too immature to differentiate between the sexes.

Although Boesemani Rainbows have large mouths, their throats tend to be narrow. Offer foods that are not too large. The Boesemani Rainbow is an omnivore and should be fed a mixed diet of prepared flakes, frozen, and live foods.