Learn More
These are your current custom fields:
Betta splendens
http://www.seahorseaquariums.ie/info/10 How to care for Bettas, Gouramis and Paradise fish.pdf
http://www.youtube-nocookie.com/v/3wmOkQjrKy4?version=3&hl=en_GB
4FW 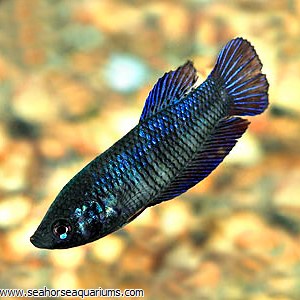 The Betta is without a doubt, one of the most popular freshwater tropical fish. And it is easy to see why. The Betta is, first and foremost, brightly colored in shades of vibrant hues unparalleled among freshwater fish. Second, this member of the Belontiidae family is hardy when kept in ideal water parameters.

Finally, despite their seemingly delicate beauty, Betta splendens requires simple care, which makes them a favorite of both beginning and advanced hobbyists. Betta splendens is often referred to as Fighting Fish or Siamese Fighting Fish, since it has been bred over the years to be both colorful and combative, especially towards other males.

As such, only one male Betta should be kept in an aquarium. However, smaller, shorter-finned - though often equally as colorful - females may be housed together with caution. The Betta should be housed with peaceful fish that will not nip at the Bettas glorious, flowing fins.

An ideal environment for the Betta is a well-filtered aquarium that holds a steady temperature of between 24° and 30°C.

Though the Betta is often sold in small bowls in department stores, for best care, Betta splendens should be kept singly in aquariums of at least 5 litres. It also prefers a variety of hiding places amongst the foliage of freshwater plants.

The Betta can be bred in the home aquarium. For breeding purposes, males and females can be temporarily housed together. Once laid by the female, the eggs are placed inside a bubblenest and tended by the male Betta.

Fry appear in about 24 hours and must be fed very small food initially, such as crushed or powdered flakes and newly hatched brine shrimp. Fry will also take finely chopped hard-boiled egg yolk.

Provide the Betta with a carnivore diet consisting of a quality flake food, frozen or freeze dried bloodworms and brine shrimp.