Learn More
These are your current custom fields:
Pterophyllum altum 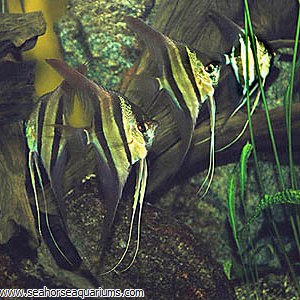 The Altum Angel is a wild caught angelfish that comes from the rivers of Colombia, South America. This species is the only true wild strain of freshwater angelfish, and was originally identified by Dr. Axelrod as Pterophyllum scalare altum.

Since then, this species has been re-identified as Pterophyllum altum. This species can be identified by its brown vertical stripes over a silver body. The fins are thin and typically, will extend the length of the body. This species is more sleek and taller than most other angelfish.

It prefers a well-planted tank of at least 100 litres with soft, slightly acidic water. Rocks and driftwood can be added to the aquarium, but leave plenty of space for swimming.

The Altum Angel is very difficult to breed in captivity. It is best, when trying to breed the Altum Angel, to house a number of angels in the same aquarium until they pair off. After a pair has developed, a flat surface needs to be provided where the eggs can be laid. A piece of slate, a large plant leaf, or even a flowerpot should be positioned at an angle of about 30 degrees in an area of moderate water flow.

The female will lay the eggs and the male will follow behind to fertilize. After approximately three days, the eggs will hatch and the fry will emerge. Feed the fry newly hatched brine shrimp until large enough to accept crushed flake food.

The Altum Angel needs to be fed a variety of foods including vegetables as well as meaty foods. Feed a quality flake food as well as live and frozen foods such as brine shrimp and bloodworms.