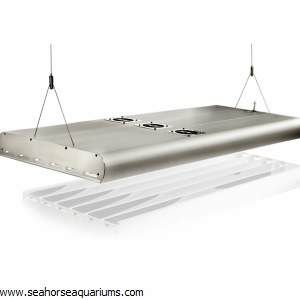 The ATI-Powermodule is a highend-solution for T5HO-Lighting. It has a soft design with rounded endprofiles in "livingroom-quality" The active-cooling and the slight-in acrylic-cover are designed for maximum light output.The air-outtake on the frontend of the Powermodule steers the warm air away from the tank. The active cooling is an important part of our fixtures. The active cooling preserves not only electronics, but keeps also the bulbs in the optimal temperature range at the same time, which means in the result to an increase of the efficiency of over 15% opposite our earlier uncooled power bars.

In order to obtain the maximum from a light, various individual solutions are unified into a total concept.

There are diffferent, measureable factors which have been incorporated into the concept of ATI lights.

Also, as far as we know, we are the only manufacturer which has decided to use the most superior reflecting materials on the market today. This is a material which has a 98 % total-light reflection, normally used in such high tech applications as TFT,LCD and LED displays in Mobile phones, Notebooks , Monitors and Television equipment.

Thus , in contrast to the otherwise normally used polished- aluminum reflectors , an increase of over 10 % in the level of illumination can be measured.. This means a further step in the efficiency increase in the T-5 technology.
The 8 + model units requires three sockets. One, will control the inner tubes, which is show on the right, and the second, controls the rest of the T5s, while the the third is for a universial adaptor to control the active cooling fans.

The universial adaptor has a selection of voltages to control the speed of the cooling fans. We recommend 4.5v for normal surrounding temperture, 19c to 22c. During summer, the voltage can be increase if desire.