What is a Seahorse?
Where do they live?
How many are there?
How big do they grow?
How long do they live?
What and how do they eat?
Who are their predators?
What is so unusual about their eyesight?
How do they swim?
Is it true that seahorses mate for life?
Is it really the male who gives birth?
What threatens seahorses?

What is a Seahorse?

Seahorses are fish that have existed on the planet for over 40 million years. They live in water, breath through gills and have a swim bladder. Seahorses are like a mixture of animals, having the head of a horse, the pouch of a kangaroo, the tail of a monkey and the colour changing ability of a chameleon.


Where do they live?

Seahorses are found in almost every sea and ocean in the world from as far north as Ireland to as far south as Tasmania. Seahorses tend to like sea grass beds and areas where they can hang on in the current, in fact a seahorse may hang to the same piece of seaweed for it’s entire life.


How many are there?

There are between 30 and 40 species worldwide with most being found in the Indo-Pacific region. It is often difficult for scientists to identify seahorses because individuals of the same species can vary greatly in appearance. New species continue to be found nearly every year.


How big do they grow? 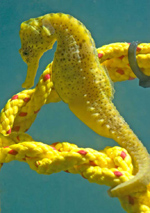 The size of seahorses range greatly from the large Australian big-bellied seahorse (30 cm or more in height) to a tiny pygmy seahorse (less than 2 cm high), about the size of an eye lash.


How long do they live?

Some smaller seahorse species can live for only one year but most species live for on average 6 years. We have one pair at Seahorse Aquariums that we have had for 12 years now.


What and how do they eat? 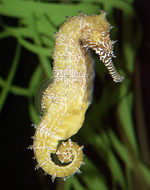 Seahorses have no stomach or teeth. Instead, they suck their prey in through a tubular snout at such speeds that the food instantly disintegrates. They wait until prey comes close enough and then suck it in through their snout. They will ingest anything small enough to fit into their mouths (mostly small crustaceans, but also fish fry and other small invertebrates).


Who are their predators? 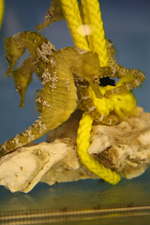 Seahorses have few predators due to excellent camouflage, a sedentary lifestyle, and unappetizing bony plates and spines. They have been found in the stomachs of large fishes such as tuna and dorado, and are also eaten by skates and rays, as well as penguins and other water birds. A seahorse has even been found in the stomach of a loggerhead sea turtle. Crabs may be among the most threatening seahorse predators; damaged tails indicate a narrow escape. Unfortunately for most seahorse populations, man is their biggest predator.


What is so unusual about their eyesight? 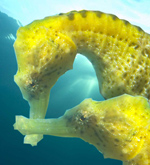 Seahorses have excellent eyesight and their eyes are able to work independently on either side of their head. This means they can look forward and backwards at the same time, this is particularly helpful when hunting food and avoiding predators.


How do they swim?

Seahorses are poor swimmers. They swim by beating their dorsal fin along their back between 30-70 times per second. Pectoral fins which appear as ears either side of the head are used to help the seahorse with stability and steering.


Is is true that seahorse mate for life? 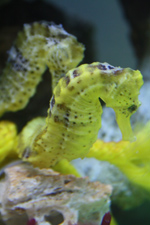 Seahorses pair for life. They perform an elaborate courtship dance every morning of their lives. This involves changing colour and often spiralling around an object. This display can last for up to one hour.


Is it really the male that gives birth? 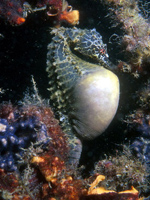 The seahorse is the only animal in the world where the male gives birth. The female transfers her eggs into the males pouch which he then releases sperm to fertilise the eggs. Pregnancy varies from 14 days to 4 weeks. Labour can be a long process with contractions lasting up to 12 hours. The number of juveniles born ranges from 50 to 1500 depending on the species. Less than one in a thousand will survive to adulthood in the wild. 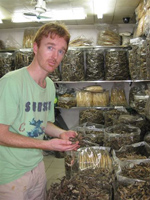