Ringo is now resting after his predictions for the GE2011.  he would like to thanks all of you - Over 2000 for visiting hiom on his webcam.  He is still on show at Seahorse Aquariums so please drop in and say Hi :-)

Seahorse Aquariums and Newstalk 106 – 108 fm are delighted to bring you Ringo the Octopus. Listen in to Newstalk for more information on Ringo and his predictions.

The BIG prediction: Its been the prediction Enda Kenny has been waiting for. Ringo, the officialpsychic octopus of the Tom Dunne Show has predicted an overall majority for Fine Geal.

Dr. Kealan Doyle who looks after Ringo said the following leading up to the prediction. "We decided to give Ringo plenty of time to make his most important prediction ever and the big news is that he hasemphatically chosen Enda Kenny and Fine Gael to lead the next Gevernment.  He was actually in both jars indicating a FG / Labour coalition but after some deliberating he moved completely into the Enda Kenny jar and has not left it sence. 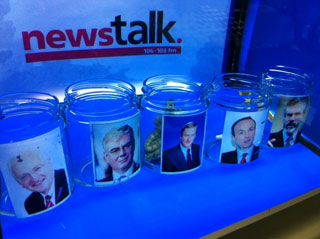 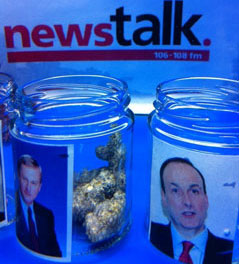 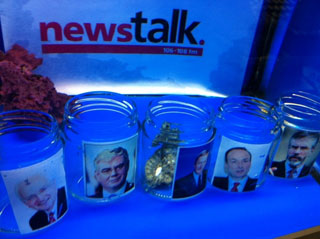 About Ringo: Ringo the male octopus was born on the 27th of March 2010 in Weymouth England and is the common octopus (Octopus vulgaris).

He is a cousin of the infamous psychic octopus “Paul” who became famous when he predicted every one of Germany’s results in the 2010 FIFA World Cup.

The octopus was chosen as it is one of the most intelligent creatures on earth, with scientific studies showing them to have better memories than university students. Due to his pedigree, Seahorse Aquariums decided to test to see if Paul’s cousin possess the same psychic talents and to everyone’s amazement he has predicted both tasks correctly – choosing Micheal Martin as the winner of the FF leadership election and also predicting that Enda Kenny would NOT show up for the leadership debate.’

We  have a live streaming video of our Octopus below.  Please click the bottom play symbol to start the LIVE stream. 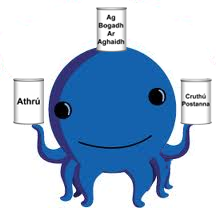